Sanctuary of Our Lady of Pia 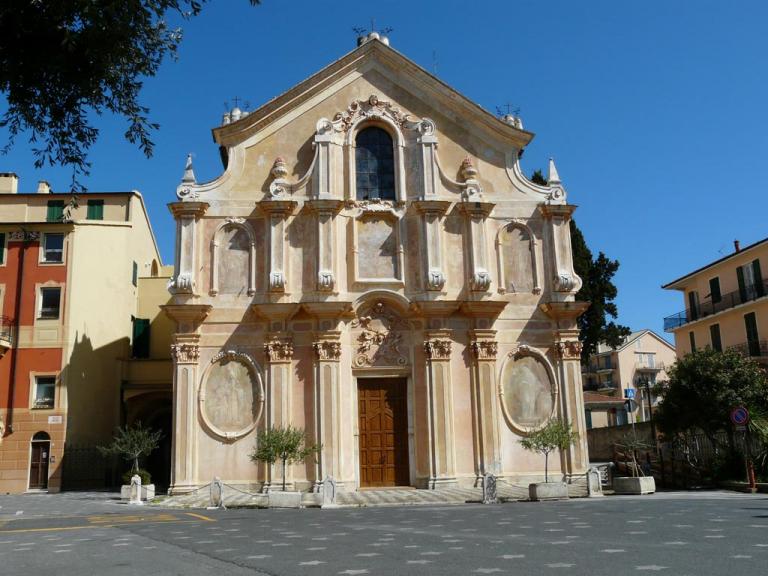 The Sanctuary of Our Lady of Pia, an ancient centre of Benedictine culture and religion, overlooks the end of the Pia valley. The origin of the Marian cult in the Pia Valley is unknown. The first document recording a chapel dedicated to Mary dates back to 1140. A true church was built only in 1302. Some pointed arches and the fine still intact bell tower (13th century) are the only remains of the ancient church.
The bell tower has seven storys of mullioned windows with two round-arched lights and with Finale stone columns and capitals. It is one of the most relevant examples of Ligurian 13th-century bell towers, witnessing the transition from the Romanesque to the gothic style. During the 14th and 15th centuries, monks and laymen alternated, until, in 1477, Marquis Galeotto Del Carretto decided to build a monastery adjacent to the church and to entrust it to the Benedictines of the Congregation of Monte Oliveto.
The monastery was enlarged at the end of the century and the construction of the first Finale stone cloister began. It was completed only many years after, in 1921, when the building of a second cloister was begun. The second cloister was completed in 1944.
The church was rebuilt with one nave in the Baroque style at the beginning of 1700, after the design of Gerolamo Veneziano called Fontanetta da Noli. The painting of the Virgin was placed on the elegant polychrome marble altar donated by Counts Prasca (1728).

The monastery houses the very venerated panel of the Virgin with Infant Jesus by Nicolò Da Voltri (end of 14th century, beginning of 15th) and various works of art dating back to the most flourishing period of the monastery (beginning 16th century): three terra-cotta groups of the Della Robbia school (Virgin feeding the Infant Jesus, the Pietà, Virgin with Jesus and St. John the Baptist) and the great 15TH century Tabernacle with the Crucifixion and four Saints on the sides. During the first half of 15th century Fra Antonio from Venice, a famous wood-carver, dwelled in the monastery for many years and left many valuable works (choir and other minor objects).

The Olivetan monks remained in Finalpia for three centuries, till in 1799 they underwent the requisitions following the Napoleonic invasion. After being inhabited by laymen, Olivetan and Cassinian monks, the monastery was definitely returned in 1905 to the Sublacenses monks, who still live there.