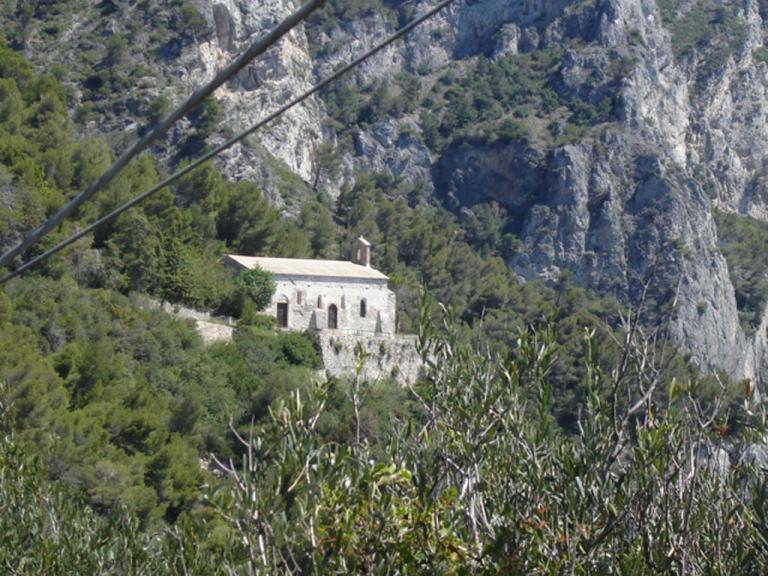 The building of S. Lorenzo (possibly the seat of a Basilian monks’ monastery of 4th-5th century) survived intact and in 1127 it was given to the Benedictine monks of Lerin. The abbey enjoyed a period of prosperity in the 14th century because the Del Carretto used the natural port laying just below (“Saracen Port”) as their main maritime base.
The port was completely silted up in 1341 after the first war against Genoa. The ancient Church of San Lorenzo stands in one of the most charming places on the Riviera, next to the Cape Noli cliff. Byzantine fragments embedded in the walls bear witness to the former early-medieval structure. The square apse with mullioned brick windows with lowered arches is very ancient, probably dating back to pre-Roman age. The seaward side, with its two main pointed-arch entrances, is from the gothic period.
The interior is now bare but it houses many elements of various periods including: the pre-Roman northern wall, a large abbot’s tomb, the holy water stoup and, under the floor, ossuaries and very ancient tombs. The sacristy, dating back to the gothic period, is also remarkable. In the past, late Roman tombs were repeatedly found around the church. A new village was originated on the flat coastal strip to the west of the Promontory in the 15th century. A new church, the present parish-church, was built there. Like the older one, it is dedicated to S. Lorenzo. The bell tower is late-gothic and the body is baroque.