The exact building date of Castel Gavone (from "Castrum Govonis"), the former seat of the Del Carretto Marquisses, is still unknown. The castle rises on a huge, steep curvilinear rampart on top of the Becchignolo hill.

The castle was allegedly built by Enrico II in 1181 on remains of previous defensive structures. It was certainly fortified in 1292. Destroyed during the struggles with Genoa, it was rebuilt by Giovanni I in 1451-1452, along with the Borgo walls.

It underwent further modifications until 1715 when it was largely dismantled by the Genoese who wanted to destroy the symbol of their ancient enemy after their conquest of the Marquisate. Only some of the retaining side-walls were spared in addition to the very famous Diamond Tower (today the best-preserved structure). The Tower, which has a curved triangular base, was built using diamond-faceted squared stones. It faces south with its acute edge resembling the bow of a ship. It is an excellent example of late medieval military architecture. Many of the original materials such as beams, stones and columns, were later used to build churches, gates and houses. 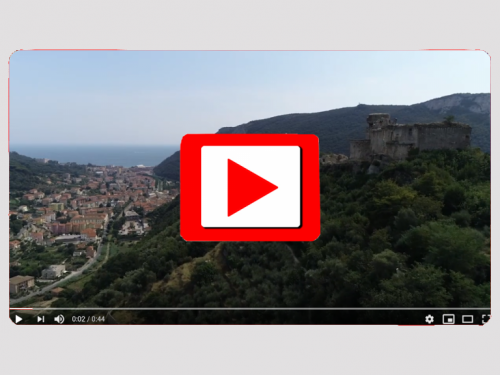